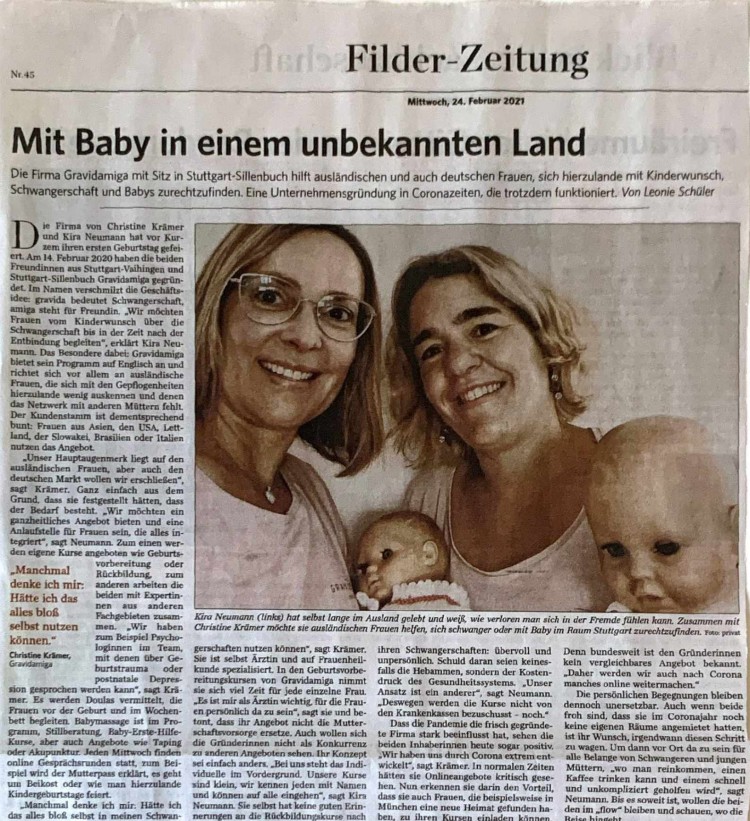 We were interviewt! Read more about us...

Here our translation of the Interview and the link to the German Newspaper.

With baby in an unknown country

The company Gravidamiga helps foreign and also German women with the desire to have children, being pregnancy or having a  babies to naviagate their way in Germany / Stuttgart. A business start-up in Corona times that nevertheless works.

The company of Christine Krämer and Kira Neumann recently celebrated its first birthday. On February 14, 2020, the two friends from Vaihingen and Sillenbuch founded Gravidamiga.  The business idea merges in the name: gravida means pregnancy, amiga stands for friend. "We want to accompany women from the desire to have a child through pregnancy to the time after delivery," explains Kira Neumann. What makes it special is that Gravidamiga offers its program in English and is aimed primarily at foreign women who are not very familiar with the customs in this country and who lack a network with other mothers. The customer base is diverse: women from Asia, the U.S., Latvia, Slovakia, Brazil or Italy take advantage of the offer.

"Our main focus is on foreign women, but we also want to tap into the German market," says Krämer. Simply for the reason that they had found that the need exists. "We want to offer a holistic service, a one-stop shop for women that integrates everything," Neumann says. On the one hand, they offer their own courses, such as childbirth preparation or postpartum recovery, and on the other, they work together with experts from other fields. "For example, we have psychologists on staff with whom birth trauma or postnatal depression can be discussed," says Krämer. Doulas are arranged to accompany women before birth, during birth and during the postpartum period. Baby massage, breastfeeding consulting, baby first aid courses are part of their program but also offers such as taping or acupuncture. Every Wednesday, online a Mama Talk takes place, for example, the mother's passport is explained, it is about solids or how to celebrate children's birthdays in this country. "Sometimes I think to myself: if only I could have used all this myself during my pregnancies," says Krämer.

She is a doctor herself and specializes in gynecology. In Gravidamiga's childbirth classes, she takes a lot of time with each woman. "It's important to me as a doctor to be there for the women personally," she says, emphasizing that her offering does not replace maternity care. Nor do the founders want to see themselves as competitors to other services. Their concept is simply different, she says. "With us, the focus is on the individual. Our courses are small, we know everyone by name and can respond to everyone," says Kira Neumann. She herself does not have good memories of the postpartum classes after her pregnancies: overcrowded and impersonal. It's not the midwives at all who are to blame, she says, but the cost pressure of the healthcare system. Our approach is different," says Neumann, "and that's why the courses are not (yet) subsidized by health insurers.

Today, the two owners actually see the fact that the pandemic had a strong impact on the newly founded company as positive. "We have developed extremely through Corona," says Krämer. In normal times, they would have viewed online offerings critically. Now they see the advantage in being able to invite women who have found a new home in Munich, for example, to their courses. Because nationwide, the founders are not aware of any comparable offer. "That's why we will continue to do some things online after Corona."

The personal encounters nevertheless remain irreplaceable. Even though both are glad that they had not yet rented their own rooms in the Corona year, their wish is to take this step at some point. To be there for all the needs of pregnant women and young mothers, "where you can come in, have a coffee and get help quickly and without complications," says Neumann. Until that time comes, the two want to stay in the flow and see where the journey takes them.

back to top
en de